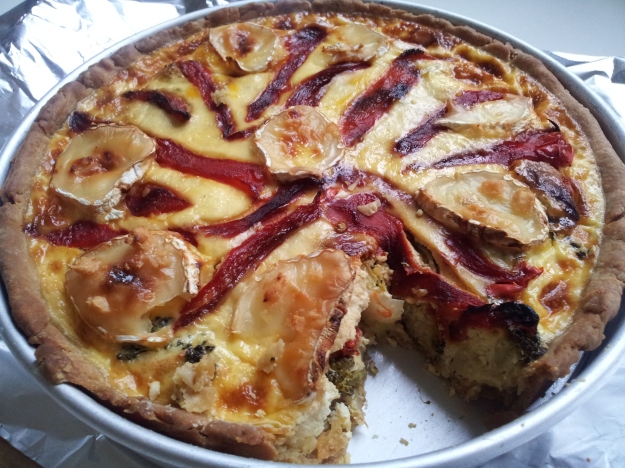 Sunday was one of those impossibly bleak hellish days where you think it’s only 7 am when it’s already 9 cos the sun aint there, and you know with a sinking heart that it just isn’t going to show its face the whole day. Maussade is what they call it here; might as well draw the blinds cos it won’t make a difference is what I call it.

I just felt like some colour and cheer and NON-stews and NON-soups and NON-winter roots, so I made us a quiche. I even *gasp* indulged in some out-of-season red peppers but drew the line at tomatoes.

I’m loathe to tell anyone how to make a quiche seeing how i’ve never made the same quiche twice nor planned ahead, but my point is quiches needn’t be rich, cheesy affairs. This one was sort of making amends for all that indulging over the festive season (that is cheese you see on top, but it was reduced-fat cheese, BUT I’ll be honest and take no credit for that, I only bought it by accident). Anyway, if anyone feels nervous about making quiche, there’s no need for that.

Combine, chill for at least half an hour for dough to relax, roll out, fit into tin (this one fitted a deep-ish, 9″ quiche tin), patch where you have to patch, then back into fridge while you go do something else.

Filling
The Solids, kitchen-sink bit: Two red peppers grilled, skinned and sliced; a head of broccoli and one leek (meant for soup but happily hijacked from its purpose) chopped up and tossed with olive oil and thyme and thrown into oven to take on some flavour while peppers were grilling.

The Liquid, ‘healthy’ bit: one block of firm tofu (the soft wobbly sort would be too wet) which when I remember to, and do try to remember, it helps, I drain by placing in a strainer with a weight on top + 3 eggs + light cream/milk/sour cream/fromage frais/yoghurt/any combination of these + seasoning.

Preheat oven to 190 degrees Celsius. Remove chilled dough in tin. Scatter solids over base. Pour in liquid almost to the top. Toppings of your choice. Into oven and out in about 40 mins.

As far as I’m concerned, quiches are all about having fun and experimenting. Take the crust: you can use butter or oil; you can vary your choice of oils; you can vary your flours (wheat, non-wheat, oat flour, millet flour, throw in some cornmeal for crunch, etc.) Just bear in mind the mouthfeel—do you mind something wetter/denser than the usual? If in doubt, just do a half-wheat, half-something else crust—or just go for it and you’ll know better the next time round. Make it plain, or throw in spices, dried herbs, sesame seeds, whatever. Using oil, you’ll find it’s slightly greasier to the touch but it’s a such a cinch throwing together and rolling out couldn’t be easier. It makes for a slightly harder crust and you won’t have the smell and flakiness of a butter crust, but we like it fine.

As for the filling, it’s a good way to use up leftovers, the odds-and-ends. Just beware of vegetables that could leak too much moisture, cook these through first. Ditto with the liquid bit: I’ve used ricotta, goat’s cheese, parmesan, yoghurt, milk, etc., whatever was lurking in the fridge. You can dial up the fat (and flavour) as you wish. Just aim for something medium-wet. I often end up improvising and adding on depending on the ‘depth’ of the solids. Grating some cheese on top just before it goes into the oven never hurts.

Which brings me to the goat’s cheese on top. You see how it stayed mostly intact? I was wondering why this weird cheese didn’t melt into gooeyness when it was pointed out to me that I had bought a low-fat version. Blerk. No wonder that plasticky taste and texture.

For tofu-haters/lovers: can you taste the tofu in it? Yes, very vaguely. But I’ve noticed that different brands of tofu vary in taste so it’s hard to say. Besides, you’ll notice I went very light on the cheese or rich dairy, which would have masked the taste. I don’t think the tofu-hater would notice if you didn’t put them on a tofu-alert. So don’t, it’s more fun that way, you can watch their face change:))