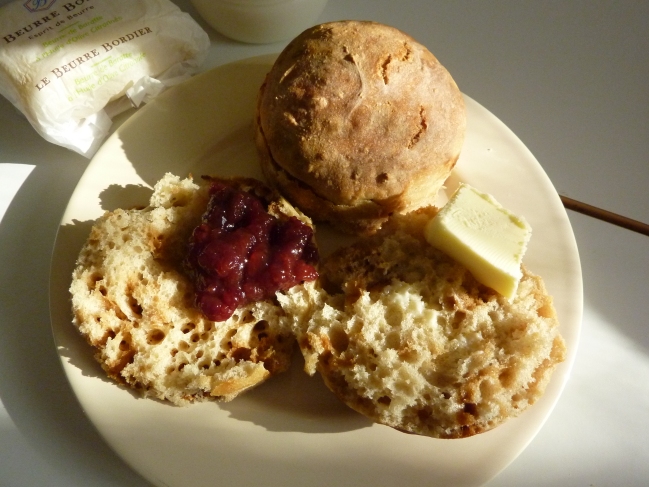 Those pans were a major disappointment. They scorched and stuck so badly I ended up with mangled remnants. I remember Peter Reinhart’s recipe called for finishing off the muffins in a preheated oven, and since I was sick of washing burnt pans by then, I decided to bake the second batch in the oven from the start. Which gave them a decidedly un-muffin appearance and make them technically buns instead of muffins? But the insides were soft and holey and as lapping-up of butter and jam.

There’re many recipes out there, but I’ve used Susan’s before and they were good, with enough wholewheat flour for more ‘body’. Mine actually had even more wholewheat flour since my leaven feeds on that.

What I did differently was place some rings directly on parchment paper, drop dough into each ring, patting them flat and filling out the sides. Then i proofed for 45 mins, during which time I preheated the oven to 200 degrees celsius. Using a peel, I transferred the parchment paper with rings into the oven, to bake directly on the baking stone. They rose nicely and gave out a lot of steam. I started reducing the temp to 180 after about 10-15 mins, and finished off the baking. I think it took 20-25 mins. Bob was just grateful we had something edible after the fiasco the day before, but I knew better that these were not real English muffins! 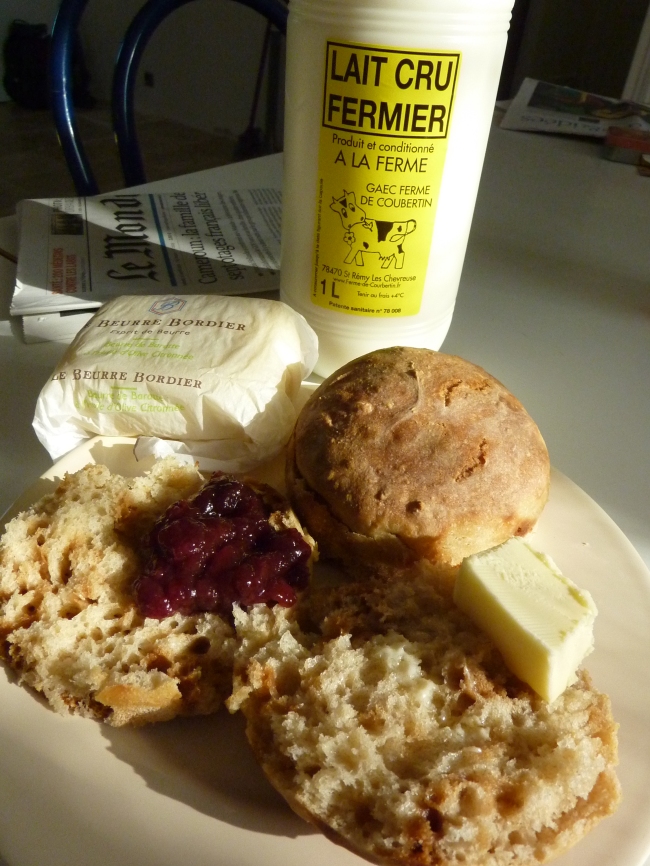 I have to include this photo because of the raw milk we bought at a farm. People who grew up on farms or grew up drinking raw milk would laugh, but what a revelation this was! I don’t enjoy drinking milk and was fearing a strong ‘cow’ factor, but it was just wonderfully sweet and creamy and there was none at all of that taste I associate with milk. I could get used to this!!

Oh, and the Yves Bordier butter with yuzu zest is divine. I can just imagine making sablés with this, and it pushes me closer to the edge of wanting to make my own butter. Yes, in this country where good butters just jump out at you from markets and supermarkets; trust me, I test butters all the time. Crazy huh.

Dan Lepard’s passionfruit crumble cake. This is for a friend so i can’t cut into it and you can’t see the pale yellow, tender crumb. Do make this lovely cake. The flavour of passionfruit and the crunch of its seeds makes this a unique cake and a winner for me. If nothing else, the house will smell terribly edible.

When I first made this over a year ago, I used freshly grated coconut. That is sadly inaccessible for me now. It feels strange to be using desiccated coconut. The recipe makes rather a lot of crumble topping, but I’m just going to sprinkle leftovers on toast. It reminds me of when we were kids and a treat was sugar and butter on toast. I also added some kaffir lime zest in the crumble. 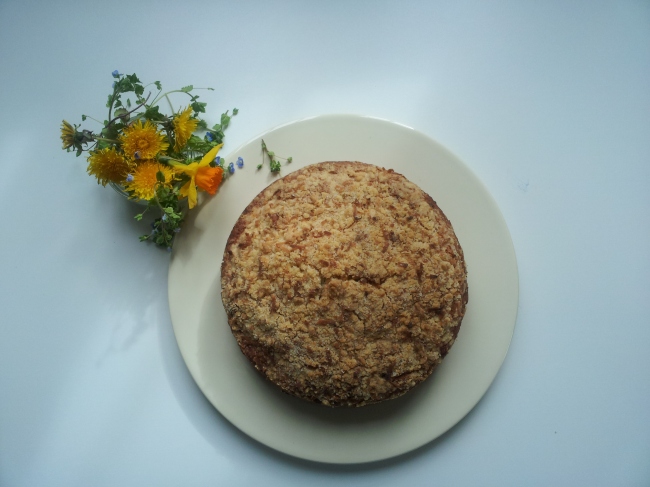 I find it all but impossible to resist jams. The one in the middle, the finished one, is a very unusual jam from Bosnia-Herzegovina which I found at the Salone del Gusto last year. When the guy said “service tree”, I thought I had misheard him. But going back and googling, there really is such a thing as a service tree. Apparently it used to be very common tree in England but is hardly seen these days. In the photo he showed me, the tree was gigantic, with apple-like fruits. The jam was barely sweetened and it had a prune-like texture and taste. The rose jam is from Romania. While I am generally not a fan of rose jams, this one was subtle and not cloying. I’ve been having it with fromage frais, and i can imagine it with some Chantilly cream, especially with its pretty rose petals inside. The one on the left is Jerusalem artichoke jam! To be tested soon …

Rustling through the fridge for lunch, a banh mi to use up the homemade baguette (nice crumb but too much of it and too chewy really for a banh mi) and most of all, the suspect round of sausage Bob came back with from Auchan. Chewing my way through this, I kept thinking of the missing grilled lemongrass beef. Filling-in-the-blanks for the palate

Had high hopes for this Tartes Kluger recipe, what with the citron confit and coriander, but it turned out underwhelming. I adapted it – used my own crust and cream filling recipe, and I might have added a bit too much lemon confit (especially since my own confit was quite cured and salty), but it was the same tart in its essence. At least I didn’t downright push the plate away as Bob did, refusing to touch it.

This is the aniseed, sesame seed and poppy seed sourdough loaf I baked for last week’s bake sale. I’ve never actually made it before, and since it was for sale, I couldn’t cut into it to try! So with the leftover spice mix, I made it again. It was inspired by Chad Robertson’s fennel seed, sesame seed and poppy seed semolina loaf in his book Tartine. While I’ve never made that one, his fennel, coriander and sultana semolina loaf is a constant in my kitchen.

I don’t spell out the method, because I really think it’s up to the baker to adapt to his/her type of flour, the particular batch of flour, the conditions, temperature, schedule, etc. etc. This one had a long, cool proof with a couple of folds, then an overnight fermentation. The fragrance of the aniseed is wonderful. You know how when you’ve been in the kitchen, you don’t realise just how fragrant it is; it’s only when you step out that you realise the whole house smells nice. We (OK, I) didn’t even wait for it to cool properly before cutting into it. And I could barely bother with taking photos!

Too bad we didn’t have the right type of cheese. It is very aniseedy though, so you have been warned.

I discover that a puny passionfruit here costs half a euro and that Bob can whisk egg whites almost as fast as the mixer. Very useful that since I still don’t have one. 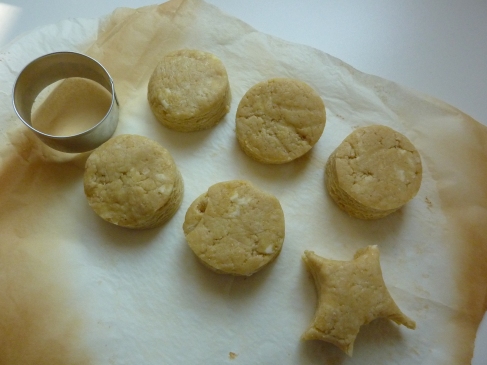 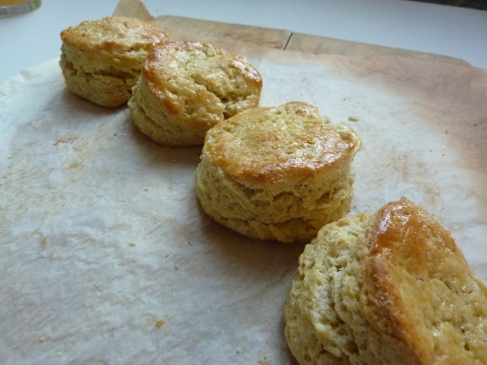 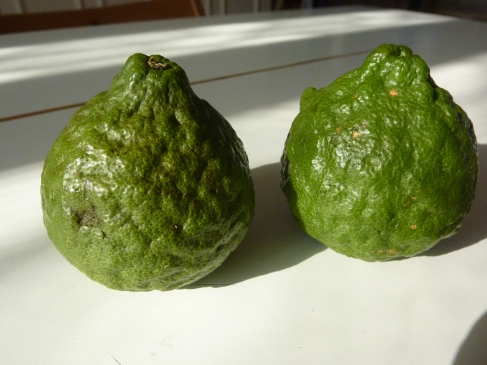 Semolina, corn and some wheat flour. Previously I’ve also added polenta for crunch. Chopped green chilli and corn. The only thing missing is coriander. Don’t get me started on the lack of coriander here. 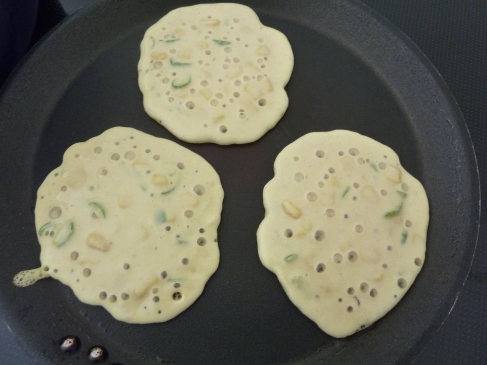 Jellyfish. They ended up being a tad overcooked, thus a bit dried and browned. I’m very impatient with the electric stove. It never gets hot fast enough for me, unlike the gas stove i’m used to. Then when I give up, it gets too hot. Otherwise it’s really nice to bite into a fluffy yellow pancake with bits of corn and chilli.

This goes to Susan’s yeastspotting.